We have attempted a range of steps to resolve this issue, and have not been able to reproduce this on any test machines. From our testing we have found this issue to arise when pdf files have been opened from C drive or network drive and attempting to save to SharePoint.

We will further investigate this issue, and update this post with further information. If you are experiencing this issue, please submit a support request here: https://www.oneplacesolutions.com/submit-a-support-request.html

Intermittent issue when attempting a save process or viewing a document library in SharePoint 365. An error code 429 dialogue box may appear. 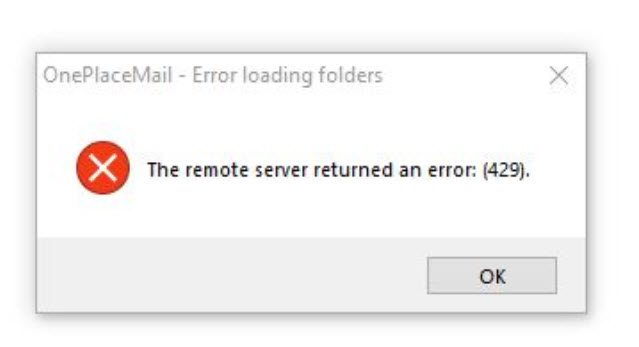 This issue is currently under investigation, OnePlace Solutions is actively working with Microsoft to resolve this issue as soon as possible.

This has been resolved in Release 7.6 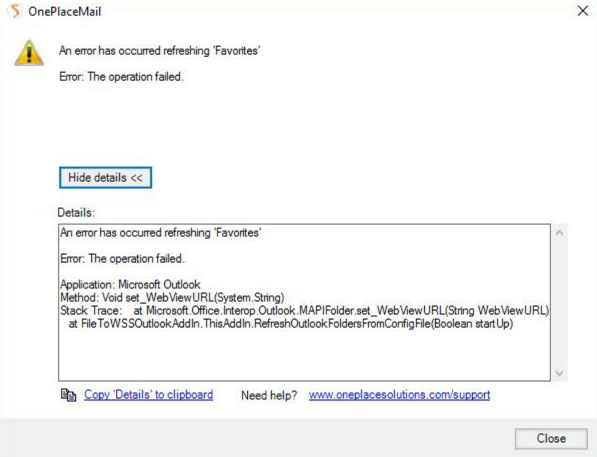 This is a known issue, which surfaced after the latest Microsoft Office/Windows update.  Since this update, Microsoft have released the following article which documents a workaround which we will be including in a hotfix that will be released shortly.

These changes include updating the registry to resolve the issue of these errors appearing for OnePlaceMail, and re-enable the ability to show content from SharePoint.

This issue has been resolved in R7.5.2

There is currently an issue when installing OnePlaceMail and using redirected profiles. The path for the PST is modified in Outlook from <network drive>\userprofile\ to '\\?\userprofile'. This causes an error when starting Outlook when OnePlaceMail attempts to load the PST.

When using OnePlaceMail or OnePlaceDocs for current release for 365

The preview action will return an error referring to a mht file. This is due to changes in how office previews files. This issue should only affect those on the current channel release cycle of O365.

This has been resolved in R7.4, and the workaround is to upgrade client installs. Please refer to this KB article.

Workaround: Install the software via MSI link. This has been resolved for R7.3

When installing OnePlaceSolutions on a machine, where the pre-requisite Microsoft Visual Studio for Office 2010 (VSTO) is not installed, the install may fail, with error Error 0x80091007.

Workaround:  Install the pre-requisite prior to running the installer package. Please select this link to download the VSTO software

See the OnePlace Solutions product suite in action and unlock the potential of your data by leveraging the SharePoint platform.
Schedule a demo

Download and try the full OnePlace Solutions product suite for Windows Desktop and Apps for Microsoft 365.
Start a trial

We're here to help, so please don’t hesitate to get touch with any questions you may have.
Get in touch